This creative Christmas reading highlights the power of Jesus’ birth in His fulfillment of numerous prophecies. Perfect for your Advent worship service.

If your church celebrates Advent, this reading best fits during Week 4 or on Christmas Eve.

The Worship Leader or Pastor introduces the reading with the script below, followed by an interchange between two readers. While Reader 1 declares the Old Testament prophecy. Reader 2 answers with its fulfillment.

“The birth of Christ does not exist in a vacuum.

The picture of a beautiful baby in a cradle filled with straw is the warm & cozy picture we like to hold on to during this season, but we cannot fully celebrate Christmas without the big picture – the larger story – the story of relationship and redemption that God offers.

Throughout history, God gave His people clues and signs to watch for – signs that He was truly at work – through the good and the bad, the noise and the silence, times of peace and times of war. God gave these promises so that His people would recognize the Messiah when He came.

Mathematically speaking, the odds of anyone fulfilling this amount of prophecy are staggering. Mathematicians put it this way:

[Note: for greater impact, project these statistics on screen]

How is this possible? Only through a God above all else. The Bible stands true as the inspired Word of God, filled with incredible detail, unequaled historical accuracy, and reliability that amazes scholars of all faiths.

We would like to share just a few of these prophecies, along with their fulfillment, many centuries after they were spoken.”

Over 300 years prior to the birth of Christ, the prophet Micah says …

But you, O Bethlehem… are only a small village in Judah. Yet a ruler of Israel will come from you, one whose origins are from the distant past. (Micah 5:2)

And centuries later, it came to pass …

Jesus was born in the town of Bethlehem in Judea, during the reign of King Herod.  (Matthew 2:1)

…the Lord Himself will choose the sign. Look! The virgin will conceive a child! She will give birth to a son and will call Him Immanuel – ‘God is with us’ … For a child is born to us, a son is given to us.”  (Isaiah 7:14)

And in Matthew, we read the fulfillment of the prophecy …

… an angel of the Lord appeared to [Joseph] in a dream. ‘Joseph … do not be afraid to go ahead with your marriage to Mary. For the child within her has been conceived by the Holy Spirit. And she will have a son, and you are to name Him Jesus, for He will save His people from their sins.’ (Matthew 1:20-21)

Zechariah prophesied Jesus’ Triumphant Entry into Jerusalem on a donkey …

Rejoice greatly, O people of Zion! Shout in triumph, O people of Jerusalem! Look, your king is coming to you. He is righteous and victorious, yet he is humble, riding on a donkey – even on a donkey’s colt. (Zechariah 9:9)

A huge crowd of Passover visitors took palm branches and went down the road to meet [Jesus]. They shouted, ‘Praise God! Bless the One who comes in the name of the Lord! Hail to the King of Israel! Jesus found a young donkey and sat on it, fulfilling the prophecy that said: ‘Don’t be afraid, people of Israel. Look, your King is coming, sitting on a donkey’s colt.’ (John 12:12-15)

Isaiah talks about the Rejection of Christ …

Who has believed our message? To whom will the Lord reveal His saving power? He was despised and rejected – a man of sorrows, acquainted with bitterest grief. We turned our backs on Him and looked the other way when He went by. He was despised, and we did not care. (Isaiah 53:1, 3)

But although the world was made through Him, the world didn’t recognize Him when He came. Even in His own land and among His own people, He was not accepted … But despite all the miraculous signs He had done, most of the people did not believe in Him. This is exactly what Isaiah the prophet had predicted… (John 1:10-11 & John 12:37-38)

Even my close friend, whom I trusted, he who shared my bread, has lifted up his heel against me. (Psalm 41:9)

Jesus said, “But here at this table, sitting among us as a friend, is the man who will betray Me. For I, the Son of Man, must die since it is part of God’s plan … A mob approached, led by Judas, one of His twelve disciples. Judas walked over to Jesus and greeted Him with a kiss.” (this was the sign to the soldiers to arrest Jesus.) (Luke 22:21-22, 47)

Prophesy said the Messiah would die by Crucifixion …

“My life is poured out like water, and all My bones are out of joint. My heart is like wax, melting within Me. My strength has dried up …  My enemies surround Me like a pack of dogs; an evil gang closes in on Me. They have pierced My hands and feet.”  (Psalm 22:14-16)

“When they were finally tired of mocking Him, they took off the robe and put His own clothes on Him again. Then they led Him away to be crucified.”  (Matthew 27:31)

They must not leave any of the lamb until the next morning, and they must not break any of its bones.  (Numbers 9:12)

Once again, it was fulfilled …

… they asked Pilate to hasten their deaths by ordering that their legs be broken. Then their bodies could be taken down. So the soldiers came and broke the legs of the two men crucified with Jesus. But when they came to Jesus, they saw that He was dead already, so they didn’t break His legs. (John 19:31-34)

“For You will not leave my soul among the dead or allow Your Godly One to rot in the grave.”  (Psalm 16:10)

And as with all the other prophecies, this also came to pass ….

“Long ago, even before He made the world, God loved us and chose us in Christ to be holy and without fault in His eyes. His unchanging plan has always been to adopt us into His own family by bringing us to Himself through Jesus Christ. And this gave Him great pleasure. Now He is far above any ruler or authority or power or leader or anything else in this world or in the world to come.”  (Ephesians 1:4-5, 21-23)

A Creative Christmas Reading Based on Isaiah 64

8 Worship Ideas to Celebrate the Meaning of Advent 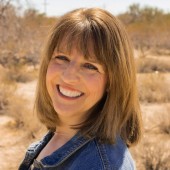 Laurie Acker is a pastor's wife and ministry mentor who helps people in small churches go from burnt out and frustrated to finding joy and success in small church ministry! After 30+ years serving in churches from big to small, in 2019 she launched a resource site called The Creative Little Church. Just a few years later with a growing international community on Facebook called Solutions & Support for Small Churches, free online conferences through Small Church Summits, and comprehensive ministry training at The Small Church Academy, small churches have more resources & support than ever before. Laurie & Dan have been married for a few decades, with 3 grown children, an amazing son-in-law, and a very busy puppy named Pesto. They all live in Tucson, AZ where the sun is almost always shining!